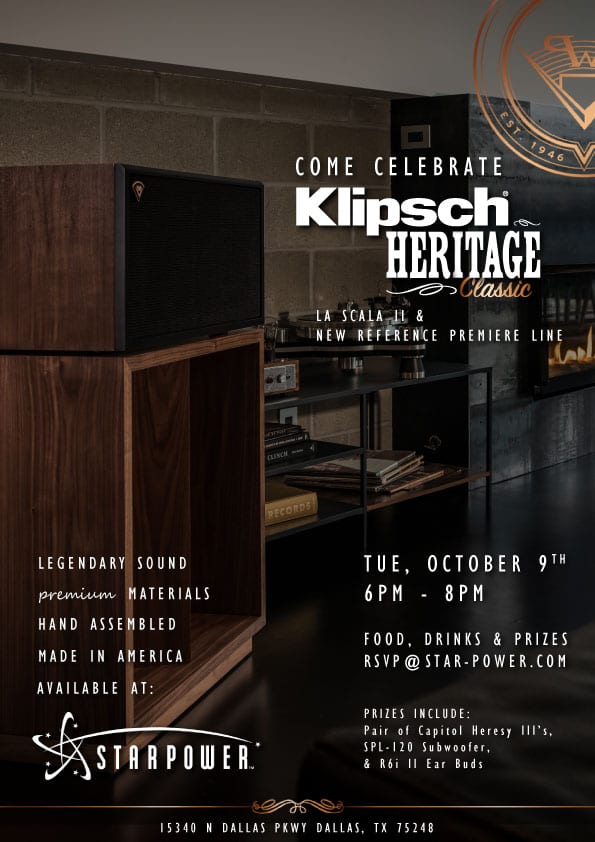 In 1946, American Audio Pioneer, Paul W. Klipsch designed and hand-built the legendary Klipschorn loudspeaker with the goal of bringing live music into his living room. Today, the Heritage Series embodies decades of engineering and classic design of Klipsch with the latest technologies available to create an unsurpassed acoustic experience.

Come celebrate the legacy of the Klipsch Heritage Series and Klipsch Reference product launch on Tuesday, October 9th beginning at 6pm at the North Dallas Starpower. 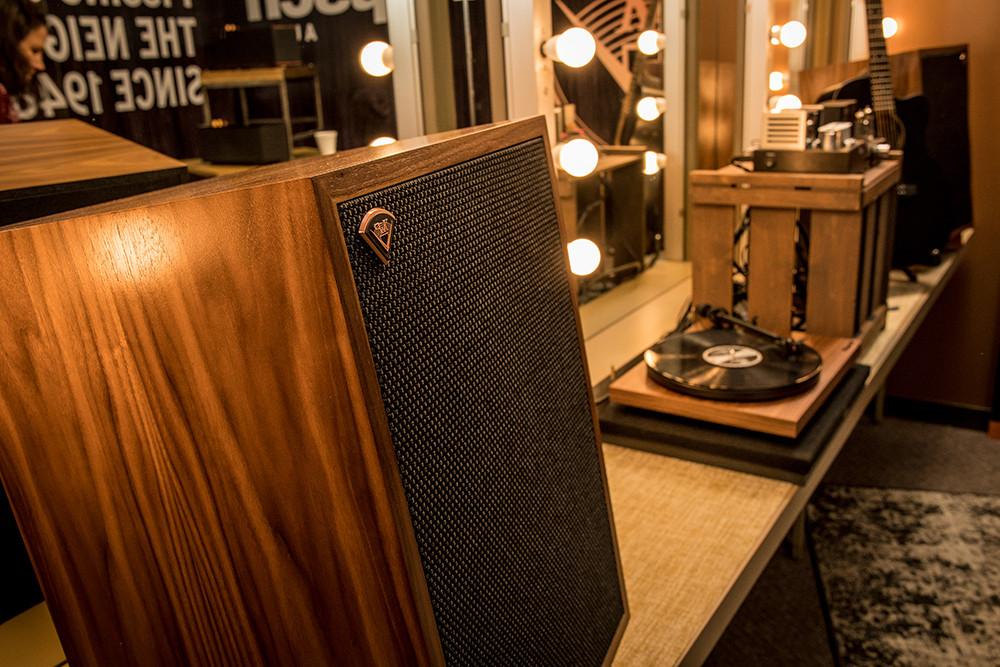 Audition this incredible sound at any of our showroom locations.

The Keepers of the Sound Series showcases pioneering artists who are authentic, uncompromising on quality, and always remain true to their core values. They work to create powerful, emotional experiences for their fans, and Klipsch strives to recreate the same experiences through our speakers and headphones.

The first installment in the video series features legendary American singer-songwriter and producer Butch Walker. Walker played in various metal/alternative bands from 1980- 2001 and began his solo career in 2002. He was named Rolling Stone’s “Producer of the Year” in 2005. Walker performed on, wrote and produced albums for artists including Taylor Swift, Train, Pink, Avril Lavigne, Keith Urban, Katy Perry, The Struts, Panic! At the Disco, Pete Yorn, Harry Connick Jr., Weezer, Fall Out Boy, and many more.

The legendary American singer, songwriter and record producer, Butch Walker, began his incredible musical career in the early 1980s and has since collaborated with some of today’s biggest music stars including Katy Perry, Taylor Swift, Keith Urban, Pink, Fall Out Boy, Avril Lavigne, Panic! at the Disco and more. With a deeply-rooted desire to find the best sound possible and a style of his own, Butch Walker has become one of the greatest musical influencers you might not know.

“I’m constantly trying to figure out how to get the best sound. It’s a self satisfying goal as a producer…” – Butch Walker

Butch Walker grew up when audio was primarily analog-driven and he prefers to make music and create his sound by hand. His relentless attention to detail in his recording process captures a rich, full spectrum of audio, which in turn, offers a better listening experience. This spirit embodies the principles that Klipsch stands for.

Check out the latest audio gear from KLIPSCH AUDIO. 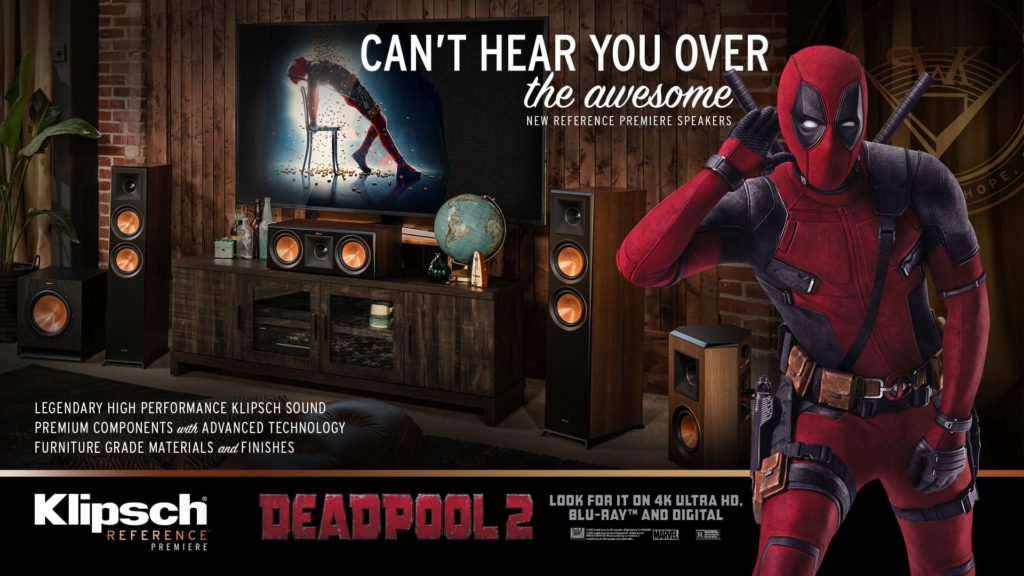 We can’t hear you over the awesome. That’s because we are demoing the new Klipsch Reference Premiere Speakers in our showrooms!

New premium materials and dramatic design features used in the Klipsch Reference Premiere series are the epitome of modern elegance. The speakers come in three furniture-grade finishes – ebony, walnut, and hand-sanded piano gloss black. Cast aluminum feet give the speakers a modern appearance and minimize contact with the floor to reduce resonance. Signature Klipsch copper trim rings accentuate the tweeter and woofer, which can also be concealed by sturdy yet flexible magnetic grilles. 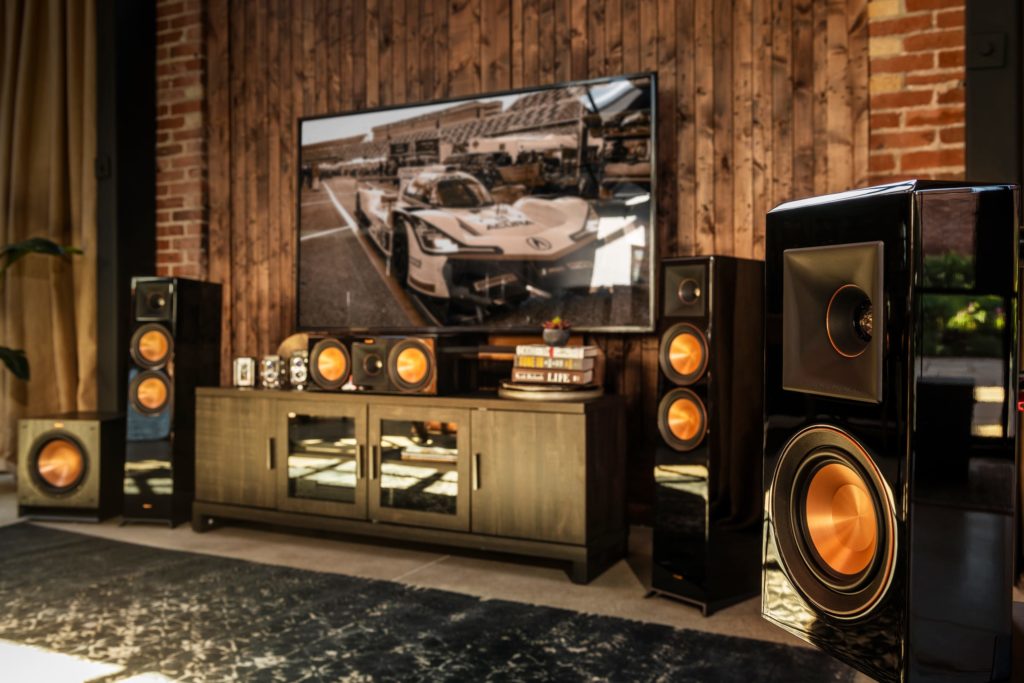 “We’ve taken the successful foundation of our best-selling speakers and enhanced them to create the hands-down, best-sounding premium speakers on the planet at these price points,” said Michael Buratto, product manager for Klipsch.

Get a Free Polk Soundbar with your new TV!

For a limited time at Starpower, get a FREE Polk Solo Signa Soundbar with your qualifying television purchase. Almost all televisions 49″ and above are included in this awesome one-of-a-kind special! Don’t wait, this offer won’t last long! ($129 value)

Samsung guarantees that on Black Friday (November 23, 2018), the retail pre-tax price of eligible models will not be any lower on Samsung.com than during this promotion period. If the price is lower, you will receive the difference in value in the form of a Visa Reward Virtual Account while supplies last.

To qualify, customers must register their qualifying purchase at samsungpromotions.com by 8/27/2018 by submitting an online claim form and receipt. Limit one per person. Cannot be combined with other offers. Offer subject to additional terms here and at https://Samsung.promotions.com/JulyBlackFriday.

Build Your Own Exceptional!

Create the space that suits your culinary style. Whether you’re an avid host, an adventurous chef or a wine enthusiast, save up to $9,397 with the Thermador Ultimate Gift with Purchase Program. The Ultimate Thermador Kitchen Savings Event!

For those not able to make the event in person, MartinLogan will be streaming the event on Facebook Live (with prizes available to those attending and those watching via Facebook Live).

Prizes include (must be present to win):

Since 1983 MartinLogan has handcrafted high performance speakers featuring electrostatic and other thin-film technologies. Their award-winning designs, advanced transducers, and outstanding customer service have long made MartinLogan’s amazingly detailed speakers a must have for home theater and music lovers around the world. Located in Lawrence, Kansas, MartinLogan’s dedicated in-house design and engineering team carefully creates each speaker to provide unparalleled sound reproduction along with industry leading aesthetics.

Save a discount equal to the tax on the finest brands like Sony, LG, Samsung, Pioneer Elite, Whirlpool, Sub-Zero, Wolf and more. All expertly installed by our award-winning installation teams. Exclusions apply, see store for details.

Forget the Tax on Your New TV or Projector

Save the Tax on Home Appliances

At Starpower, we have a tradition of providing Only the Best in home entertainment. We’re an organization of seasoned and decorated professionals committed to delivering excellence to our clients, since 1995. From the best brands to the detailed attention provided by our in-house installers, you can be confident that you made the right choice. When powered off, The Frame will automatically enter into Art Mode which allows the TV’s screen to display exclusive works of art ranging from paintings to images from personal photo libraries. The Frame allows you to change the art on your wall in an instant, anytime the mood strikes. Show a personal photo. Maybe a painting or print from Samsung’s collection of curated art and mattes. No matter what you select, your art will look real thanks to the display’s brightness sensor which intelligently detects ambient light. It adjusts the color and brightness settings so your art always looks real regardless of where it is or what the time of day.

The most beautiful TV you’ve never seen at a price you can afford: Samsung has 3 customizable frame options you can add. Walnut, Oak and White frames easily attached to the outsize bezel to perfectly compliment the décor of any room. When power on, The Frame delivers a superior range of brilliant color and rich contrast over Full HD thanks to 4K HDR Pro technology. It displays a wider range of light and dark in the same scene, adding detail to every picture. Samsung’s 4K Color Drive Extreme technology gives you exceptional color. With over one billion colors more than standard 4K UHD, you see a more vivid, realistic picture.

In order to keep the electricity bill down, The Frame has a built-in motion sensor which detects people’s movement. The TV will automatically activate power-saving mode when there is no one in the room and turn back on when someone enters.

Nothing ruins a room’s design more than lengthy wires. Samsung’s No Gap Wall-mount and Invisible Connection allows The Frame to be mounted on the wall just like a picture frame or painting without messy cables, making it a complete package for the living space.

The Frame by Samsung is a completely new category of TV that elegantly enables you to make any space more welcoming, more entertaining, and more inspiring.

Starpower is the first retailer in DFW to introduce the Frame from Samsung.