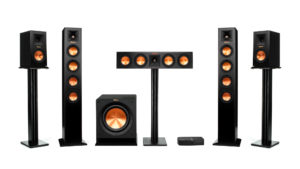 The Draw of a Wireless Surround Sound System

There is an obvious reason that everyone wants wireless speakers. Wires are inconvenient and unsightly in any situation. Even when it’s easy to tuck them out of sight—such as behind the shelf or entertainment unit where your home stereo system is positioned—they are still taking up space, getting tangled, and perhaps drawing the (unwanted) attention of your cat. Wireless speakers are cleaner and easier to put anywhere you want, hence their popularity.

In a home theater setting, the potential benefits of wireless speakers are perhaps even more pronounced. While home stereo systems can typically be tucked away on a wall somewhere without much issue, the same isn’t always true about a home theater speaker setup. Surround sound systems might require speakers to be placed toward the middle of the room rather than on or near a wall. This positioning gives better sound and targets it more specifically toward your home theater seating arrangement. Unfortunately, with wired speakers, it also means figuring out how to get those wires from the speakers to the wall and back around to the surround sound receiver. Leaving the cables loose looks messy and poses a tripping hazard; running them in an unencumbering way means spending more money on wiring solutions.

Having a wireless surround sound system is attractive to consumers who assume it will solve these problems. In truth, wireless is a bit more complicated when it comes to surround sound and home theater applications. 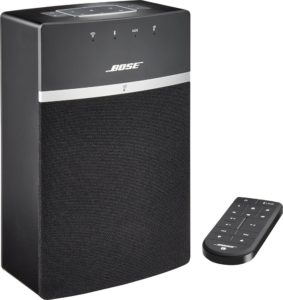 Choosing the Best Sound System for Your Home Theater

Until now, a wired surround sound system has generally been thought to be the best sound system for a home theater. The reason is that wiring plays a crucial role in connecting a variety of complex systems reliably. While we might talk about a surround sound system as one thing, it’s actually a network of electronic devices working in concert. The speakers, for instance, need to receive audio signals from a movie or TV program to produce the sound from that presentation. These signals are passed as electrical impulses from the TV (or whatever is producing the sound) and through a receiver, which then directs them to the speakers via wires. The receiver plays the role of amplifier, converting the electrical impulses into audio that is loud enough and clear enough for you to hear and enjoy.

In a wireless setup, you need these same processes to take place without the wires that carry converted electrical impulses to the speakers. Instead, you need an audio transmitter, which itself connects directly to the receiver or, in some cases, is already a built-in feature of the receiver. The transmitter then sends those signals to the surround sound speakers around the room. Voila: your speakers are playing audio wirelessly.

Or are they? The flaw with wireless speaker setups is that they only really account for one part of the problem. Sure, it is possible to convey audio signals from your TV to the receiver and then out to the speakers via a wireless transmitter. The questions we’re not answering, though, is how those speakers get the power they need to play that audio.

In a traditional wired stereo setup, we don’t usually think about how speakers are getting power, because we aren’t plugging them into the wall. Instead, the energy is flowing to speakers from the receiver/amp over the same wires that are conveying the audio signals. Thus, the speaker gets both the audio it wants to play and the power it needs to play that audio. In a wireless speaker setup, there is no wired connection, which means those speakers need to get power in a different way. Audio signals can be transmitted wirelessly, but wireless charging is not a feature that speakers have—at least not yet. As a result, these speakers either need to be powered by batteries or plugged into an AC power source.

Said another way, wireless speakers are (usually) not actually wireless. They might need to plug into the wall directly, or they might plug into a second amplifier situated at the back of your home theater room. These options can save you from having to route wires around the entire room to reach the front of your home theater space, but they don’t save you from cables entirely. You might also try to go the battery-powered route, but then you risk losing audio right during the most exciting part of a movie if the batteries run out of charge.

None of these issues necessarily mean you shouldn’t try to go wireless with your home theater setup, just that you maybe should temper your expectations before you get started. Perhaps there is a speaker system in the not-too-distant future that will be able to operate reliably and consistently with no wires or power cords required. So far, we aren’t living in that world. 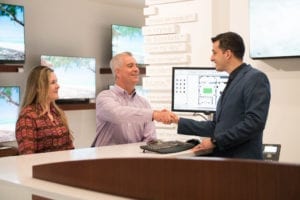 Whether you’re dedicated to going as wireless as possible or want to make sure you are selecting the best equipment possible for your home media room, there’s a place you can come for strong recommendations, products, and installation services. At Starpower, we are here to help you pick out the best sound system for your home theater. We can also assist you in arranging the home stereo system components throughout your media room, so that the wires are posing as little issue as possible. Contact us today to see what we can do to clean up your space of tripping hazards or ugly wires.